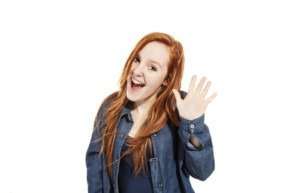 I will admit I used to be exceedingly shy. In my 20’s I would have rather done almost anything rather than speak publicly. It gave me a bit of a reputation as aloof. Which wasn’t true. If I knew you I was super friendly but if not I could barely raise my head to talk to you. Back in the days when I got licensed (I had to throw this in), we had to take an oral exam along with the written exam. I knew I had to be able to do that. So I started on my own exposure therapy plan which included me teaching some classes. It worked and I passed the exam first try and subsequent to that I would no longer consider myself shy.

However, I would not say I was very friendly either. Again if I knew you it was fine but if not…. I am not sure what shifted in me one day but I became friendly. I started to talking to people everywhere. Not on every occasion but when something came up in a grocery line I would talk to the person next to me. I even initiated conversations. And what I found was that rather than draining this introvert it actually invigorated me.

There is a lady that lives on my street (this is related I promise) who walks a lot and has always seemed rather odd. Not bad just odd. One evening she rang our doorbell and gave us a package that had been misdelivered to her house. She had made a concerted effort to bring it to our house when we were home to make sure it got to us safely. It was very nice. Ever since that day every time I pass her she waves and I wave back. In fact, the other day I passed and she was waving at me with two hands. I actually almost stopped the car because I thought something was wrong but it was just an emphatic wave. It brought a big small to my face. She has been so happy to be friendly with us in this small way. I wonder how she gets treated in the world and I know perhaps people ignore her a lot because she does come across as odd. But not looking beyond is so short sighted. We won’t be best friends ever but I think it is nice for both of us to be able to exchange our friendly wave. And when I saw her two-handed wave the other day I really realized how important this small acts of kindness are. there is a lot of negative going on in the world right now. I think it serves us all to try and put a little bit of kindness out there when we can.

One Foot in Front of the Other

One Foot in Front of the Other

I will confess I love Christmas. Why am I confessing that in June? It is because recently I have had one of those periods in life that have felt a bit overwhelming. And the other day the song “one foot in front of the other” kept running through my head. I didn’t recognize where it came from until I sat down to write this post and googled it. It is from one of the classic Christmas shows from the 60’s and 70’s that any person growing up in that time period would recognize. For those interested in the video I will embed it at the bottom of this post.

I watched it today as I contemplated writing this post about the need sometimes to do just that put one foot in front of the other in order to get past the challenging times. But as I watched the video the theme was about doing something kind for someone and having it change their perspective. And that is what I would rather focus on. Because even within a challenging time so many people have done kind things for me, some little, some big. Some of them were asked for and some of them were just given freely. Some were rather random like a strange woman stopping me and starting a conversation that ended with her saying “keep wearing paisley” that left me smiling. Some of the experiences I don’t even think the other person knew were helpful to me at the time. One woman was talking to me in a moment where I was very upset and she distracted me and made me feel better. My guess is that she doesn’t even remember meeting me.

It shows me how important it is to always be kind. You just never know what someone is going through in any given moment and how much it can mean to someone that you were kind to him or her. Right now it feels like the world is a complicated place and so many people are angry and feeling unheard. To me the solution is simple, be kind, always. That isn’t to say you can’t stand up for yourself when it is necessary but you never should be mean doing it. It is important to recognize that our actions and words affect others always and to be mindful of that. You never know when someone is just putting one foot in front of the other and needs a boost.

Can thinking positively help you be more positive?

Recently someone referred me to Shawn Achor. He researches and writes about positive psychology. He believes that if you do certain things everyday for 21 days you can be happier.  He recommends doing the following.

2. write 2 minutes daily about postive interaction you have had

3. write down 3 things you are grateful for with no repeats

4. meditate each day for at least 2 minutes

5. do something nice each day

Since reading this I have talked with a few people that have tried the challenge and have found that they are thinking in a more positive way. Why don’t you take on the challenge and see how it makes you feel. I would love to hear in the comments how it has worked for you.

And here is Shawn Achor’s Ted Talk. It focuses on the business benefits of his philosophy but is still worth a listen.